From The Economist, we get a link to William Easterly writing that the original racial neighborhood tipping point model of Schelling and others is unstable:

So I want to make sure this doesn’t approach SIWOTI territory, but it involves some of my favorite econometrics graphs. This paper is actually a reaction to a paper by Card, Mas, and Rothstein (2008), Tippin and the Dynamics of Segregation, as the author notes in his paper:

The advantage of this paper’s methodology in estimating the entire distribution (2) is that it allows for the “classic” tipping point story to be compared to two alternatives: (a) there are no tipping points, and (b) there are tipping points but the CDF does not fit the “classic” global tipping story. The Card et al. 2008 approach, in contrast, can only rule out (a), not (b).

So Card et al. found that there are some tipping points in the racial composition of neighborhoods which Easterly concedes; their stability across the entire CDF is in question. Since looking at finding a single tipping point is more fascinating to me than trying to derive the full equilibrium story, I find this difference to be less interesting than the original (the Easterly paper obviously goes into this in detail).

Let’s check out what Card et al. found. This is one of my favorite econometric graphs ever: 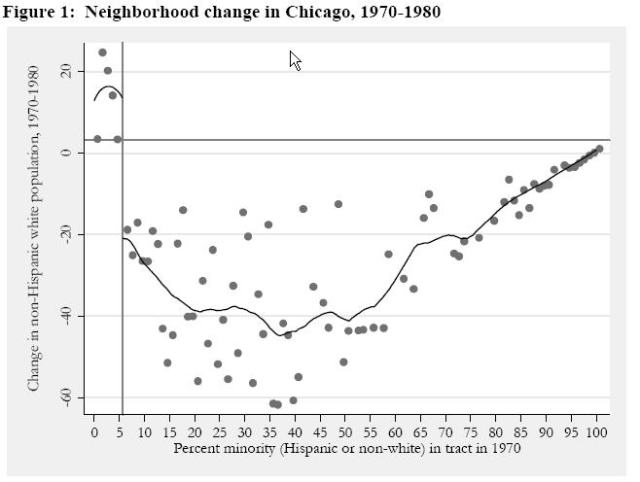 On the x-axis is the racial composition of a neighborhood in a tract of housing in Chicago by minority, non-white or hispanic, in 1970. On the y-axis is the net percent change in white non-hispanic population between 1980 and 1970. We go to war with the data army we have, and we get census tract racial compositions in 10-year blocks. See the story it tells?

If the racial composition in 1970 is 5% minority, it gains 10% in white population over the next ten years when we check the data again in 1980. If the racial composition is 7% minority, it loses 20% in white population. How crazy is that! Something about that extra 1 percent minority share causes a chain reaction within a ten year time frame that causes a massive flight of whites from the neighborhood.

(Extra-geek sidebar: I replicated this paper a few years ago using quantile regressions. I wanted to see the interactions between RD design that the paper uses and quantile methods. I was hoping to try and use quantile regression to tease out tail end correlations of risky portfolios, and that there would still be time to save capitalism – I failed there. I was also hoping to use this replication as bait in an application to become David Card’s star padawan. Sigh. Good times.)

Now Chicago is a city famous for, ahem, being conscious of the racial composition of its neighborhoods. How does your favorite city match up? Also from the Card paper (click for full-size): 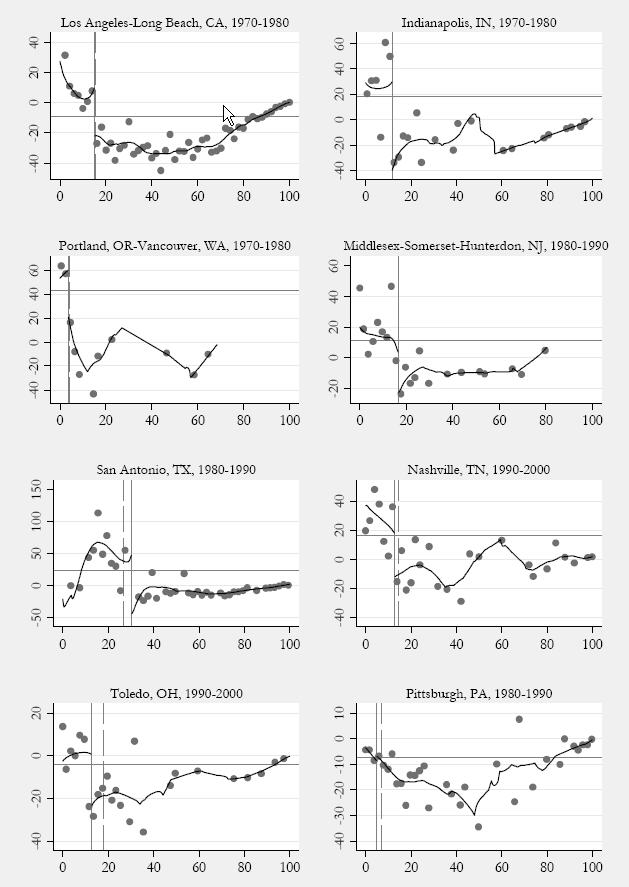 This effect is very obvious in the data during the 70s-80s time frame, but becomes less obvious in the 90s-00s. I’m excited for the 2010s data to get here already, so I can get to town seeing if this effect exists for college degrees or income.

Very related: Conor Clarke has an interview with Thomas Schelling, who is one of the people responsible for originating the tipping point model, this week (Part One, Part Two) that is really worth your time.