Economics of Contempt has some thoughts on the CFPA momentum. From Part I:

The OCC will, of course, continue to defend the right of national banks to be free from state efforts to regulate their business…

They invoke this in the name of consumer protection. Repeat that statement, but with “The CFPA Division of the Systematic Regulator” replacing “The OCC.” This is a really bad outcome, and one that I imagine the lobbyists would be gunning for. If the CFPA is being watered down and placed within a banking regulator, then the preemption part of it is suddenly much more important, and it really has to have a strong formal mission within the regulator.

Maybe it is my background, but I think it is important to “stress test” our new regulatory ideas. And one of the smartest tactics that the conservative movement has brought to discrediting government over the past 30 years is putting industry lobbyists in charge of running their own agencies. Thomas Frank, as always, is good here.

(There’s a lot of work in the sociology of finance/economics about performativity, and the question “do economists make markets?” I think it’s pretty interesting when it comes to option theory. But I think it’s most interesting that the modern conservative movement has made Public Choice theory ‘come alive’ by stuffing the government’s regulators with crony industry insiders and lobbyists. Which way does the mirror reflect?)

So when you think about what a CFPA will look like, you can’t look at it thinking Elizabeth Warren is going to run it – you need to look at it and think that President Sarah Palin is going to appoint a credit card executive to run it in 2012. Someone who wants to be part of the revolving door with the banks, and someone who really believes, in their heart, that poor people in America are “lucky duckies.” If the agency is primed to serve the interests of the banking community, and their primary powers are in making it easier for banks to circumvent state regulators, this could be a disaster. Ironically, tying the hands of regulators here can make them do better regulation.

Some Good Reasons Why

Let’s remind ourselves why this CFPA is a good idea. Two quick thoughts. One: this is what consumer financial protection looks like currently, from the Consumer Federation of America: 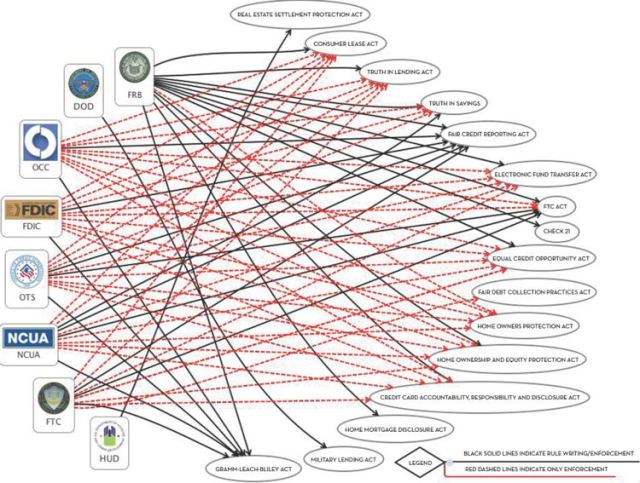 I always find the assumption that increasing consumer protection must increase the cost of lending funny, because the current hodgepodge system involves so much uncertainty of enforcement that it isn’t at all clear we are at an optimal point.

The Securities Act is the reform that brings us “disclosure” as the mechanism for handling buying and selling stocks and other securities. We assume that this is a basic thing now – how could you be against disclosing all relevant information in a security? – but of course at the time the financial system yelled it would collapse if it was held legally responsible for disclosing all relative information when a securities is created and marketed.

Now right now, consumers are facing a range of financial products, from student loans to credit cards to mutual funds, that are much more complicated than they faced in 1933. Some of this complication is innovation, some is meant to synthetically create opacity in the product innovating product differentiation, and some is just regulatory arbitrage. As Dan Geldon has written, the regime of disclosure has been turned into a weapon against consumers instead of the mechanism to let information and competition do its job. So it’s time to update that regime to handle the 21st century.