Timothy Lee on the Symmetry of Interchange, Transfers, Incentives

I spoke with Annie Lowrey on interchange, and Reihan Salam wrote about interchange at Forbes.

Guestblogging for Megan McArdle, Timothy B. Lee writes about the The Symmetry of the Interchange Debate. It’s worth reading, but here’s two parts. First Tim has a sweet deal with his card:

In particular, hardly anyone in the interchange debate has paid much attention to the generosity of cardholder benefits programs. For example, I currently have a credit card from Chase that offers me 1 percent cash back on every purchase I make, with no gimmicks or strings attached. Perhaps even more impressive is the seemingly perpetual availability of 12-month, interest-free loans. [Clarifying edit: these are separate offers from other banks, not another feature of the Chase card. And they’re on purchases, not balance transfers.] I was skeptical of such offers when I first started getting them, but I’ve now used them a few times and there doesn’t seem to be a catch. I’m not sure exactly how to value a 1-year, 0 percent loan, but it’s easily worth more than 1 percent of the amount borrowed.

Second, here’s his argument on regulation and symmetry:

Most of the commentary on interchange fees have focused on the rate paid by merchants, but this is the wrong number to focus on. Rather, we should care about the net of merchant fees minus cardholder benefits. If credit card fees rise but benefits rise by an equal amount, the result is a wash as far as the customer is concerned. I’m not aware of any precise data on cardholder benefits, but judging from the fact that companies used to charge an annual fee to issue credit cards and they now frequently offer generous cash back, I think it’s safe to say that benefits have gotten more generous over time. So looking only at interchange fees gives us a distorted picture.

Now maybe you don’t believe that banks will continue to pass increased fee revenues on to their customers. But notice that this is a symmetrical situation. If you doubt that competition among banks will shift most of the benefits of higher fees to consumers, then you should be equally skeptical of claims that competition among merchants will translate lower credit card fees into lower retail prices…

First, the benefits are limited neither to frequent flyer miles nor to rich people. But more fundamentally, what merchants want is irrelevant, because there’s no reason to think consumers’ interests are more aligned with merchants than with banks. Indeed, you could view the credit-card-issuing banks as agents for cardholders, negotiating for discounts that are passed along to their customers.

The Durbin Amendment only covers debit cards, not credit cards, for interchange regulation.  But I want to address his points about interchange more generally.

This argument is predicated on the idea that all people in the United States have access to the high-end consumer credit market. In general, the “two-sided markets” argument assumes a single representative consumer and a single representative business in a closed loop, where value can’t really be transfered in or out. That’s not the real world, where there are multiple payment systems, including cash, debit and credit cards with different prices, and multiple people with different access to credit.

Rich is a loaded term, but let’s throw some numbers out there. Here is an estimate that 13.2% of American households don’t own a checking account and about 9.5% of American households hold no bank account at all. They’ll pay the same price for goods and services as Tim, but not receive 1% back in cash. There’s a move to try and get the unbanked decent prepaid debit cards. They’ll definitely not get a good rewards problem out of it.

Is there inequality within the credit market for those who have access to it? From Adam Levitin’s Priceless? The Social Costs of Credit Card Merchant Restraints (19), which gives a history of the “merchant restraints” on distinguishing between debit and credit, we know that: “Visa Signature cards, which carry a high level of rewards and are marketed specifically to affluent consumers, comprise only 3.5% of all Visa cards but have accounted in recent quarters for 22.2% of all Visa purchases.” That’s a high volume of purchases with high rewards going to just a few people. Many people have rewards cards, but the very best ones are reserved for the high end, and those at the high end spend more than those not at the high-end. And everybody pays the same price.

We also know that around 45% of interchange goes to fund rewards. These high interchange rates drive up prices. Tim’s 1% back requires a merchant to pay an estimated 2.22% interchange for that feature alone. People who get less back, or who use debit, or who pay with cash, are paying higher prices to transfer money to Tim.

Want to get even more regressive? The people with poor access to high-end credit are paying higher prices to transfer tax-free income to Tim. Tax-free! It’s true many people have access to rewards cards, but some use them significantly more, and with much nicer, rewards than others. Those few are not scattered randomly among the population.

Are banks agents for consumers? There’s two interesting thoughts here. One is that your wallet is saturated with so many credit cards that in order to compete to get you to hold another card at the margin, the banks have to offer you better rewards. They do that by jacking the fees on merchants. So competition actually increases prices and doesn’t decrease them. If everyone was on equal footing in the economy perhaps that doesn’t matter. But we are not in that world.

The second is that the banks have really set up the system to maximize credit card usage, not to help consumers. I don’t know him, but Tim seems like a really nice guy. Should we think of Tim, getting rewards from the merchants, like this? 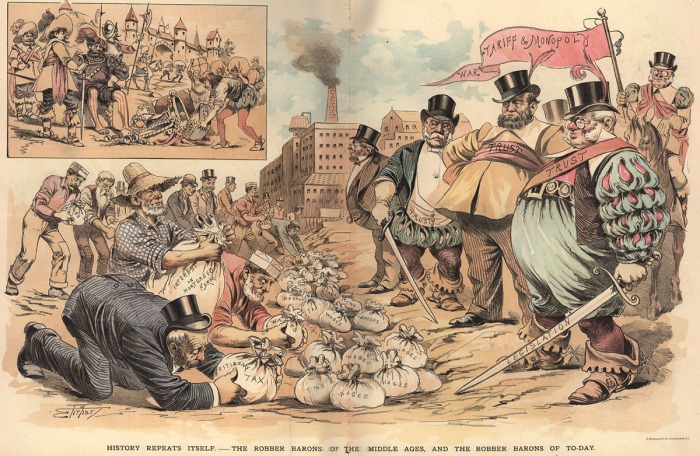 No! Not even a little bit on this policy. (Save the image for the net neutrality debates.) Tim is rationally responding to the incentives and market structure placed before him. Credit card companies have designed these rewards and, more importantly, designed the merchant contract to incentivize people to, when they always pull out their wallet, go for the highest rewards and fee card, and to always avoid typing in their pin number. That’s how incentives work, they just feel like the natural thing to do (it’s a lot like ideology that way).

Is setting incentives to maximize credit card usage problematic beyond transfers? Well, if you worry that people are, in the words of one credit card executive, “sloppy payers”, and that the rewards function as bait for the arsenal of late fees and double-billing cycles and universal defaults, then yes. If you worry that people are blurring the lines between transactional and revolving credit in an unhealthy way, then yes. Inflation? I dunno, maybe.

But it’s definitely problematic for the merchants to pay extra for a rewards card without getting extra short-term liquidity or any other benefit over a regular card. The Durbin Amendment doesn’t do anything on that. But it does break the “merchant restraints” in the credit card contract between debit and credit. If it passes, maybe the store can offer Tim now 1.1% off on his purchase to type in his pin. Maybe not, maybe the speed of signature is faster. Maybe now real competition will come here because merchants can now innovate ways to give consumers better value up front. As a libertarian, Tim knows that markets are built on the power to contract – and the merchant restraints against being able to do these things is built right into this contract, and as a result the market reflect this original problem.

4 Responses to Timothy Lee on the Symmetry of Interchange, Transfers, Incentives