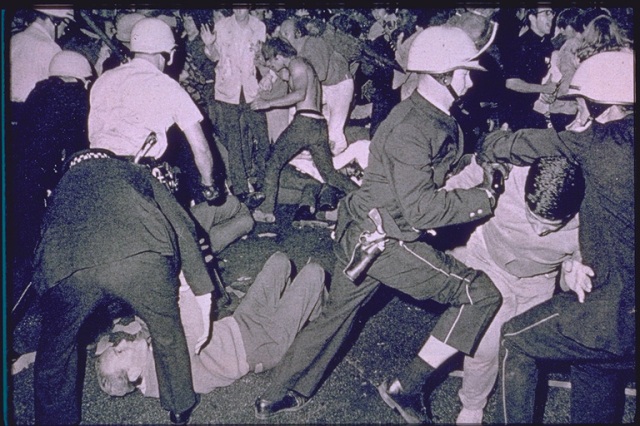 Can I say how happy I am about Dave Robert’s new term, from his post: Introducing ‘climate hawks’? Three backgrounders on me before we get into it.

The first is that one of the foundational stories about my extended family growing up was how one of my older family members was terribly disappointed he missed the massive 1968 protests of Chicago’s Democratic National Convention.  The protests with all the leaders of the Yippies and the New Left.  Protests that disrupted a Democratic party ignoring the serious problems in Vietnam.  Protests that had 10,000 protestors in total.  The protests that ended in what was later termed a “a police riot.” He was so close to being there, but the timing didn’t work out and he had to see, and hear all about, his friends being there instead.

I should clarify that the family member was a police officer, and during the 1968 convention was in training to join the Chicago police force. And growing up I got to hear about how if only he could have joined one class earlier, if not for an accident of year of birth, he could have been there beating hippies with all his friends. And really, with all of America.

So baked pretty deeply into the Konczal habitus is the notion that punching hippies is a form of civic service, like voting or serving on a school board. I can’t particularly help it, but organizing around the idea of making things more “crunchy” gives me a viscerally negative reaction.

However I have an equally visceral and negative reaction to the following two graphs from the IPPC “The Physical Science Basis” (chapter 10, box 10.2), which are warming estimates from the dozen and a half leading models that have tried to predict the increase in temperature from global warming, with all kinds of tail risk floating out there (we discussed these graphs here): 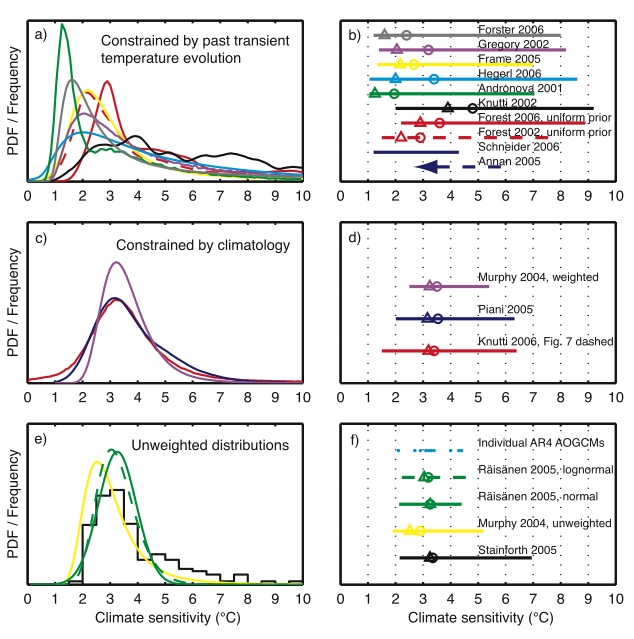 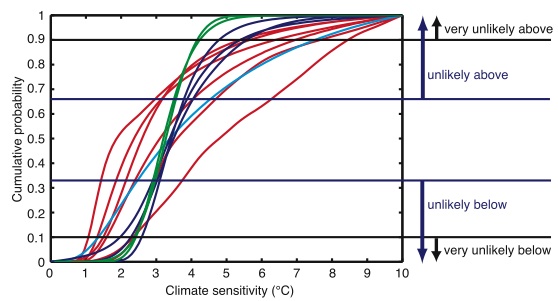 And a third thing:  I don’t mean to brag, but as a financial engineer I’ve been at some of the cutting edge of ignoring, hand-waving and justifying away tail risk in a manner profitable to the top 0.1% of Americans and that maximized the social costs to everyone else.   So I’m also conscious of that move by elites as well.

So you see the dilemma.   Severe warming, impossible to reverse once it has happened, with serious tail risks.   But my natural reaction is to hate hippies.  What can I do?  And how can I think of myself?

David Roberts has the answer: embrace the term “climate hawks.”

A lot of people seemed to mistake the nature of the undertaking. The point is not, emphatically not, to “rebrand environmentalism.” Please kill me if I ever have to listen to another discussion about rebranding environmentalism. The point is not that environmentalists need something new to call themselves, but that the class of climate hawks is not coextensive with the class of environmentalists. They are not the same group. In a Venn diagram, there would be substantial overlap but also substantial … underlap? nonlap? disjoint? Point is, there are plenty of people who understand climate change and support clean energy but do not share the rest of the ideological and sociocultural commitments that define environmentalism as historically understood in the U.S. (Which is fine!)….

First and foremost, it doesn’t carry any implications about The Truth. It doesn’t say, “I’m right, you’re wrong. I’m smarter and more enlightened than you.” Instead it evokes a judgment: that the risks of climate change are sufficient to warrant a robust response. By definition, everyone must make such judgments on their own. Rather than being a Manichean choice — you get it or you’re stupid — it becomes about values, about how hard to fight and how much to sacrifice to defend America and her future. That’s the right conversation to be having….

In foreign policy a hawk is someone who, as Donald Rumsfeld used to put it, “leans forward,” someone who’s not afraid to flex America’s considerable muscle, someone who takes a proactive attitude toward gathering dangers. Whatever you think about foreign policy, is that not the appropriate attitude to take toward the climate threat? Does it not evoke a visceral sense of both peril and resolve, the crucial missing elements in America’s climate response?…

Why not “clean energy hawk”? For one thing, two words are snappier than three and easier to write. For another, it’s important to keep the threat of climate change at the center of the conversation; clean energy is one way of fighting back against that threat, but there are many others. A climate hawk leans forward, wants to attack on as many fronts as possible.

This is all embedded in the term, and that’s the other advantage: the meaning is immediately clear. No explanation required. It will strike people as something they already are, not something they have to be persuaded to become. It may not appeal (as much) in other countries, but most everybody gets what it means. It is shallowly descriptive enough to capture the desired referent class, but at the same time normative enough to evoke some of the right values.

This is all fantastic. I also like it because the flip-side of it, climate doves, are the right representation for those who acknowledge warming but fail to see serious problems about it. Usually the answer is couched in how growth will fix every single imaginable problem, even problems we are already having trouble dealing with in rich countries that will only get much, much worse (changing nature of water collection, massive global population displacement, flooding and natural disasters, etc.). “Hey, let’s just keep doing what we were doing, and we’ll be so rich and happy things will just take care of themselves” is the response of climate doves, and it’s the response of doves everywhere on all dovish topics.

But that kind of naïvety won’t work for serious climate hawks. And we are very serious, and deserve to have the debate framed around us, because we are climate hawks!

26 Responses to Joining the Climate Hawks