Digging Into the Changing Regulatory State of the Past 10 Years

Lots of exciting stuff around this post from Michael Mandel post, The Age of Regulation Started Ten Years Ago, including comments from Ezra Klein and Tim Fernholz.

This is from a paper he wrote for the Progressive Policy Institute, Reviving Jobs and Innovation, which argues “Don’t add new regulations on innovative and growing sectors during economic downturns…But despite the weakness in financial regulation, it’s a mistake to view the post-2000 years as an era of untrammeled free-market capitalism. In fact, the evidence suggests that 2000–2007, under the Bush Administration, was actually a period of rising government influence over the economy.”

Here is the graph he produces that shows an giant increase in the percent of federal regulatory agency employment as a share of private sector employment starting around 2002, with another uptick around 2008:

I wanted to take this apart and investigate it further. What has changed in our regulatory state?  I also wanted to see how the Great Recession impacted this chart – does it account for the rise in 2009? 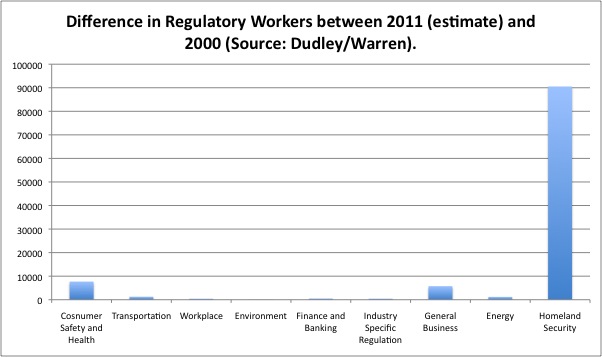 Homeland Security accounts for over 80% of the increase in government regulatory-designated employees during the past 11 years. Homeland Security added ~40,000 workers in Customs and Border Protection, as well as going from 0 to 60,000 workers in Transportation Security Administration. (Immigration and Customs Enforcement record 4,000 less workers.) I do not know how much of this is shuffling around people from military employment (who may not have been previously counted in this data) or whatnot.

Over a 0.1% increase in non-Homeland Security government regulatory burden!  That looks convincing, except 2009 was a deep recession year, with unemployment over 9%.  If our economy has deep structural unemployment problems nobody told the year 2000, which was about as full-employment as we’ve ever seen lately, with unemployment at 4%.

There were simply more people working in 2000, and as such the denominator in this equation is much larger.  And government employment is sticky, so the numerator isn’t any less in 2009 – it provides services in recessions and booms. If employment drops 3%, the government doesn’t immediately fire 3% of its workers. This automatic stabilizer functionality has the added benefit of helping the macroeconomy, and it also reflects the role of government.

So there’s a 0.002% growth in the non-Homeland Security regulatory burden over the past 9 years if you look at the entire labor force.

Looking at the numbers, there’s a lot of agencies gaining and losing, with a surprising number adding few if any people over the past 10 years. And what’s interesting is what other kind of regulatory agencies put on additional workers. The FDA added workers. So did the Drug Enforcement Administration, as did the Nuclear Regulatory Commission. Office of Thift Supervision went down in number of employees, which is funny as they were the go-to regulatory agency when AIG-FP and others went regulator shopping.

My absolute favorite:  One of the biggest winners over the past 9 years was the Patent and Trademark Office, which went from 6,128 employees to 10,098 employees. Given how much patents are used to shut down competition and let the largest companies rent-seek, this is probably the anti-growth part I would flag. For those who know it better, is it a symptom of court decisions? Are they playing catch-up to industry demands?

So there you have it. The Bush-era brought you a regulatory state of militarized borders, drug wars, strategically weakened financial regulatory bodies for convenient regulatory shopping, and aggressive use of patents to shut down competition. This is not the regulatory state I fight for.