Kelly Evans on Unemployment Insurance in the Wall Street Journal

(Video is R-Rated for kung-fu gore.)

At this point the debate over extending unemployment insurance should be as fluid and effortless as kung-fu drills.  The research over the past 10 years have given us a sword so sharp it could have been crafted by Hattori Hanzo himself; it’s up to liberals to start chopping ideological limbs with it.

It’s rare we go line-by-line through an article at this blog, but this latest by the Wall Street Journal’s Kelly Evans, Jobless Benefits’ Effect on Unemployment, deserves it–it is particularly choppable.  Both Felix Salmon and Zachary Roth responded. Here we go:

“A recent study by the Federal Reserve Bank of San Francisco found the unemployment rate at the end of 2009 would have been nearly half a percentage point lower—9.6%, instead of 10%—if jobless benefits hadn’t been extended beyond their usual 26 weeks to as much as 99 weeks.”

That’s a very low number considering the extension, and it reflects the terrible job conditions in the market. You can see that because the time it takes for “New Entrants”, people who are just entering the labor force and who don’t receive unemployment insurance, to find a job has skyrocketed. In fact, a third of New Entrants have currently been looking for work for more than 26 weeks, precisely the old normal-mode length to which Evans would like to reduce unemployment insurance.   It’s really bad out there for job searchers.

“Regardless, policy makers are hoping that extending benefits—along with other tax breaks—will generate enough short-term strength in spending and growth to overshadow any rise in the unemployment rate.”

0.4% of the labor force is 154 million people, so that 0.4% turns into 616,000 more people who are unemployed because of unemployment insurance.

Remember Evans is talking about the supply of labor. That’s only half the story.  According to the latest CEA report, The Economic Impact of Recent Temporary Unemployment Insurance Extensions, extending unemployment benefits has created 793,000 new jobs.  This number is more than the number of unemployed it has discouraged from taking a job, so the net effect has been to create jobs.   And that’s before we consider liquidity issues and keep people from dropping out of the labor force, which we’ll do below.

“Individuals not actively searching for work or willing to take available jobs may claim they are unemployed in order to receive benefits.”

Unemployment is the tally of people searching for jobs.  One way to get the unemployment rate down would be for every doctor, scientist and engineer looking for a job to quit, become homeless and start eating from dumpsters for survival.  They would no longer be unemployed, since they are no longer looking for work.  Alternatively, they could all start working at McDonalds tomorrow wasting their talents the economy needs, keeping people from getting high-end servicers and distorting the service labor market, but they would have a job and no longer be unemployed.

Both results would “solve” part of our unemployment crisis and are also insane for an economy and its growth.  Searching for the most productive job you can do is not only worthwhile, it’s the whole point of a market economy.  Without it we are living in caves.  As such it is one of the most important things for us to subsidize, which unemployment insurance allows us to do.

We should split the effect of unemployment insurance into a good element of providing people “liquidity” to find the best fit they have for their job versus the bad elements of providing work disincentives.  A recent study has found that 60% of the effects of unemployment insurance are from this good liquidity aspect.  This number can only go up in the Great Recession.

“[Unemployment Insurance] could artificially boost the size of the labor force, which is used to determine the unemployment rate.”

The labor force is just the employed and the unemployed. 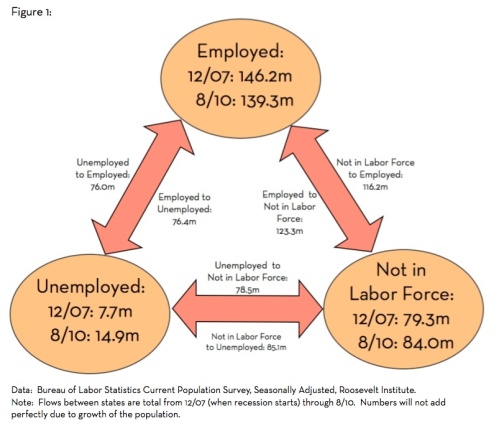 We could follow this advice and move a lot of the workers out of “unemployed” and into the “not in labor force” to help solve the unemployment problem, but I would see that as a net loss. Workers who drop out experience a long-term negative effect on both finding jobs and the wages they are paid, something economists refer to as hysteresis, and are much less likely to be reabsorbed into the labor force.

This has a bit of a feel of a medieval doctor and his leeches to it, where if we can just purge the unemployed out of the labor force we’ll be back to a healthy economy.  Sadly, both unemployment and underemployment (so people with no unemployment benefits) are up across all industries and all occupations, so you’d have to purge a lot of the population across the entire economy to get unemployment down this way.

“Another concern, as the San Francisco Fed notes, is that the extension of jobless benefits may ‘reduce the intensity’ with which the unemployed search for work. Longer term, this could lead to a higher level of structural unemployment in the economy as workers’ skills erode.”

These are the first years where it is more likely an unemployed person will drop out of the labor force than find a job. Unemployment insurance keeps people looking for work instead of dropping out of the labor force, where the real rot can set in on human capital.   So if we are worried about a cyclical demand crisis turning into a structural one from the rot of hysteresis, which this statement is, then unemployment benefits are part of the solution, not part of the problem.

I’d go with a line from Notorious B.I.G.’s “Things Done Changed”: “Shit, it’s hard being young from the slums / Eatin’ five cent gums not knowin’ where your meals comin’ from.”   Not knowing how you are going to survive in the short term when you have the skills to survive in the long term is a terrifying problem.  Unemployment insurance’s ability to provide for people in the short term while they readjust, reducing the panic, uncertainty and desperation of people who are most affected by changes in labor demand is not only good economics, it’s the right thing to do, and as such the unemployment benefits should be extended.