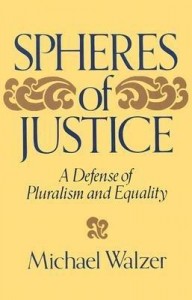 A lot of people have been talking about economic inequality and Rawls (Krugman, Yglesias, Karl Smith). Krugman: “My vision of economic morality is more or less Rawlsian: we should try to create the society each of us would want if we didn’t know in advance who we’d be. And I believe that this vision leads, in practice, to something like the kind of society Western democracies have constructed since World War II — societies in which the hard-working, talented and/or lucky can get rich, but in which some of their wealth is taxed away to pay for a social safety net, because you could have been one of those who strikes out.”

I’ve been thinking a lot about this lately.  I want to draw attention to this excellent post by Will Davies of the blog potlatch about re-orientating our sense of fairness away from Rawls towards Michael Walzer. Davies has a longer discussion about a conservative Rawlsian position emerging which takes existing inequalities as given and then decide how to make them fair enough to be just.  Rawls without the original position.  Given that we are going to defund higher education in this country, how can we do it in a way that is fair or that people would be indifferent?  Etc.

Davies thinks this is going to be a dead-end and wants us to consider that we need more non-economic forms of inequality:

Firstly, the fairness brigade might want to put down their John Rawls, and pick up Michael Walzer’s Spheres of Justice. This means dropping hallowed metaphors of ‘level playing fields’ and equality of opportunity (which don’t seem to be having much effect in the first place), and considering how different sociological forms of inequality do or do not influence one another. Walzer’s argument, very simply, is that there are multiple spheres of inequality in any society. The task is not to erradicate them, but to ensure that none trumps or determines all of the others. So, for example, political contests cannot become dictated by economic contests (which is where the US most conspicuously fails), or vice versa.

When looking at British and American neo-liberalism, the question is whether each society has robust enough non-economic forms of inequality to withstand the unleashing of capitalist relations of domination into more and more spheres of society. To put this another way, resistance to capital in the social, cultural and political spheres is dependent on non-capitalist elites and non-capitalist forms of competition, or alternatively aristocracy of some kind.

I think this is a really interesting approach. Walzer’s definition from his book is “No social good x should be distributed to men and women who possess some other good y merely because they possess y and without regard to the meaning of x” (20).   That one is successful in the economic realm shouldn’t allow them to be successful in the political realm through their economic success. Inequality in one sphere shouldn’t be able to dominate other spheres – dignity, family, life, health, education, etc.

The contrapositive of Walzer’s definition is what interests me, which would roughly be nobody should be precluded a social good y because on their lack of possession of an unrelated good x.  Inequality in education access, health care, life expectancy, quality of jobs are intrinsically linked to inequality in wealth and income with our poor levels of economic mobility in this country.  Fairness and equality in our court and criminal justice system are largely a function of wealth.  This economic stratification creates larger rigidities and barriers – some by accident, some by design – to further mobility and equality of opportunities in non-economic spheres.   In this sense it can address control and power by the elite in a way that Rawls doesn’t, and in a way that we could use right now.

This is something I’ll be giving more thought to in 2011.  Any thoughts out there on this?