But for today, Brooks:

So Americans should be especially alert to signs that the country is becoming less vital and industrious. One of those signs comes to us from the labor market. As my colleague David Leonhardt pointed out recently, in 1954, about 96 percent of American men between the ages of 25 and 54 worked. Today that number is around 80 percent. One-fifth of all men in their prime working ages are not getting up and going to work…

Part of the problem has to do with human capital. More American men lack the emotional and professional skills they would need to contribute. According to data from the Bureau of Labor Statistics, 35 percent of those without a high school diploma are out of the labor force, compared with less than 10 percent of those with a college degree.

Matt Yglesias and Jamelle Bouie respond, both noticing how the Great Recession is missing from the narrative.

I would throw in two things. As for “human capital”, here’s the employment rate of 20-24 year old college graduates that Charlie Eisenhood dug up:

Around 5 percent more college graduates ages 20-24 are not getting up and going to work.  It’s difficult to argue that they need to go to college, because they did.  It’s difficult to argue that they can’t move to new jobs (unlikely to be homeowners) or suffer high health care costs (doesn’t health care reform allow employers to push their health costs onto their parents’ employer?).  Unless we think that the graduating class of 2008 is fundamentally worse than the graduate class of 2006 I don’t see a technology problem.

Also for fun, the graduating classes post-Recession have increasingly large student debt loans, which should lower the reservation wage they’ll accept due to liquidity pressures.  So the idea that everyone 20-24 is on vacation is harder to accept compared to earlier years.

There’s an argument that 20-24 year olds are waiting longer for their first job since income and career paths are determined by one’s first job.  But that begs the question of why they are waiting, and amplifies the misery this extended period of joblessness is causing for people.

As for the FatherBringsHomeTheBaconEconomics of the Brooks piece, before we declare permanent gynohegemony over the labor markets can we mention that women have also lost 1.6 million jobs in the recession?

It’s worth noting that men are adding jobs right now, while women are staying steady and have actually lost jobs over the past few months. Normalizing the employment numbers to January 2010 for people over 20 we see that anemic job growth of the past year and a half has gone to men, who have added 2% more jobs since then: 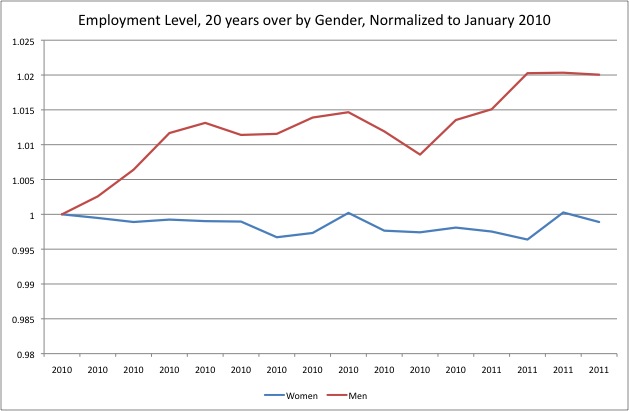 Welcome to the recovery.