A Quick Follow-Up on Unemployment by Duration Data: Job-Finding and Dropping Out of the Labor Force

I want to get a few graphs on this blog before we leave this data set behind, not sure if they’ll be of any use.  I wrote a post last week about unemployment by duration and came to two conclusions. The first was that jobs are much more likely to be matched to the long-term unemployed and less likely to be matched to the short-term unemployed relative to their historical averages. The second was that the difficultly of finding a job has increase for all duration groups, which for the short-term unemployed is an interesting development.

The graph for the second point was kind of ugly. I just thought of a much easier way of visualizing the second point. First, here’s a graph of job finding as a function of unemployment duration going into the crisis, from Shimer’s 2008 paper The Probability of Finding a Job. 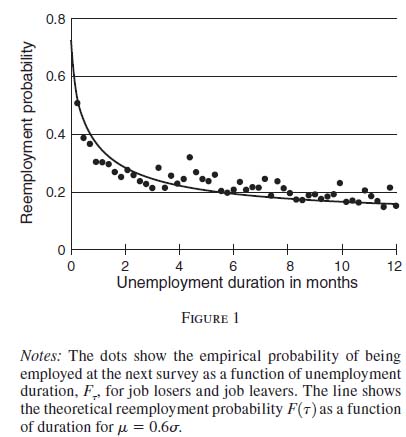 At some point in the future we’ll go into the CPS data and recreate that through the individual surveys.  For now, let’s just reorganize the data from the previous post in a similar manner, with the average monthly rate by duration from 2000 through 2007 plotted alongside the average for 2010 through April 2011, with the difference between the two also thrown on the graph:

You won’t get a sense of the shape of the curve as the x-axis isn’t in constant units of length, but that’s ok since I want to see the comparisons between the two time periods.  What’s your take? I didn’t expect to see short-term unemployed take such a hit in finding a job throughout 2010 and later.

What Can We Learn About Dropping Out of the Labor Force?

One of the unique characteristics of this recession versus previous U.S. recessions is that this is the first time since at least the 1960s where it is more likely for an unemployed person to drop out of the labor force rather than find a job over a month.

Any readers here at the cutting edge of theory used in DMP job search models? Because from what I’m seeing the whole idea of dropping out of the labor force from unemployment is completely under-theorized in the literature. The more general idea of reservation wages that are a mixture of observing potential distributions of jobs and enjoying unemployment doesn’t seem to fit conceptually with the idea of someone being more likely to quit searching for a job, especially if they still want to work. What could explain it?  Are there good papers on this?

This is especially interesting because the probability of dropping out of the labor force has actually declined from the pre-2008 Recession era. See how in the graph above the rate of dropping out of the labor force plummets in the current recession?  I’ve always wondered about that since I first dug into it.  And since I have the data open, I might as well see what unemployment duration is driving that drop.

Interesting. Because the worry about the long-term unemployed dropping out of the labor force – which is happening in serious numbers – is tempered by a relative to historical trend drop in that rate. And that is almost certainly due to the extension of unemployment insurance. It’s sad to see that instead of learning, building and expanding unemployment insurance programs they are under attack and likely to be descaled in many states.

9 Responses to A Quick Follow-Up on Unemployment by Duration Data: Job-Finding and Dropping Out of the Labor Force