There’s a great article in the Washington Monthly by Suzanne Mettler, 20,000 Leagues under the State, which is all about the hidden welfare state that exists in the United States.  The key graphic from the article: 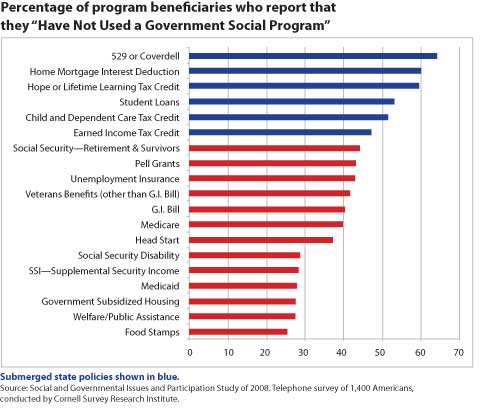 Over the past few decades, while many standard social benefits have atrophied in real value, those packaged as “tax expenditures”—the formal name in federal budgeting parlance for subsidies provided through the tax code—have flourished, growing rapidly in value and number…These social tax expenditures comprise a major part of what I call the “submerged state.” By that I mean that they are public policies designed in a manner that channels resources to citizens indirectly, through subsidies for private activities, rather than directly through payments or services from government….

Whereas mainstream Democrats have traditionally taken the lead in creating our landmark direct social programs, it was originally Republicans and conservative Democrats who initiated the benefits that operated through the tax code. Doing so enabled them to court their favored constituencies and channel resources toward them, but without creating or enlarging government bureaucracies to distribute the funds.

Over the past three decades, however, tax expenditures have evolved into the template of choice for anyone designing new social benefits…Beneficiaries of visible programs like Social Security and Medicare reported high rates of action to influence the policies they rely on—far more than beneficiaries of tax expenditures…Given how unaware the average citizen is of the submerged state, it’s no surprise that decisions to cut or expand it typically happen with little public airing, usually as part of some larger debate over budgets and taxes.

Fascinating and important work, and I’m looking forward to the book when it comes out.

As my man Franklin Roosevelt said, “We put those payroll contributions there so as to give the contributors a legal, moral, and political right to collect their pensions and their unemployment benefits. With those taxes in there, no damn politician can ever scrap my social security program.” And he’s right. Instead of an entitlement that one gets just because they happen to be a citizen here, or because they are being compensated for being a loser from the pity of the winners, the social safety net is something people deserve because they are partners and contributors in the enterprise of our country.

One thing I didn’t get is a sense of is how we got to where we are.  I know some of these hidden Welfare State items are almost accidents of history, like the mortgage interest tax deduction.  But what about the growth over the past 30 years?

I’ve been reading a lot about the early battles over privatization, and I’ve been devouring everything this Heritage guy Stuart Butler wrote back in the 1980s.  This 1985 article from Cato, Privatization: A Strategy to Cut the Budget, is online and linkable, so we’ll use that as the springboard.

It’s the mid-1980s, and conservatives can’t destroy the Welfare State.  One way to look at it is to say that people actually really like it, they like caring for each other and not risking starving to death in old age or in poor economic times and pooling risks and everything else. Butler: “And as Ronald Reagan discovered when his budget request landed on Capitol Hill earlier this year, his backbone middle-class constituency becomes the most implacable defender of a federal role when its own programs, such as Social Security, are threatened.” He says that in a bad way.

Another way to look at it, as Butler does, is that there are “public-spending coalitions” designed to always want to increase public spending. The benefits are concentrated, cost dispersed, managers are in place to always produce research saying that they need more and private sector can’t break this. Since there are no checks, there’s a ratchet effect, where it is always goes up.  As such, programs like Social Security won’t whither away and die.

How do you break this? Butler proposes that they create private coalitions that mirror the public-spending coalitions, and that they do it through the tax code. Tax expenditures can be consciously developed as ways to mobilize private businesses to demand more subsidies to provide alternatives to government services.  Since they were subsidized, they would be able to provide goods on better terms than they normally would; since they were ‘private’, they removed the linkage between people and the government. Even if a relatively similar amount of money is spent, even if more money is spent, it is spent through private means and thus helps put a check on the government. The implication, of course, is that it puts a check on what people view the government as doing in their lives, and creating this hidden welfare state might be the only way to distance people enough from the actual Welfare State to be able to destroy it.  They have to create a monster to destroy a monster.

Complaining about public-spending coalitions achieves little more than high blood pressure. But developing methods to entice the public to choose a private rather than a public way of promoting their self-interest may achieve a great deal….But a distinction is drawn between government as a provider (implying that government should levy taxes and deliver services itself), and government as a facilitator (implying that it should encourage or require those services to he provided by the private sector). Privatization, in other words, means seeking to transfer programs into the private sector using the carrot of incentives, not the stick of aggregate cutbacks…

These privatization coalitions are the mirror image, so to speak, of the public-sector coalitions. And they are at the heart of the strategy to create a “privatization ratchet” to counter the federal ratchet. By providing a targeted benefit (such as a tax incentive or some regulatory relief) to those who demand or provide a private alternative to government, considerable rewards can be guaranteed to individuals within the coalition.  Members of that coalition can be expected to press for deeper incentives and to oppose any move to eliminate existing incentives…

Privatization thus turns conventional political dynamics on its head. Lobbying pressure develops for less taxation (if a tax incentive is given), and for private, not public, programs. Moreover, each legislative victory won by the coalition, however small, serves to strengthen it, thereby adding to its capacity to achieve furthen legislative concessions and a corresponding growth in the private program…tax incentives concentrate benefits on a small number of people and they act as the nucleus for the growth of privatization coalitions….Because tax incentives are so essential to a privatization campaign, supporters of the approach should be cautious in their support of tax simplification.

Take one concrete example Butler walks through, the subsidization of IRAs being tax-free as a way of fighting Social Security, to see this hidden welfare state ratchet in action (my bold):

Social Security is a classic example of the federal ratchet in operation…Yet a minor provision in the 1981 tax act may eventually break up that coalition…By allowing all working Americans to open tax-deductible IRAs, Congress planted the seeds of a private alternative to Social Security…

It was not long after the passage of the 1981 act that banks and other financial institutions…began a massive campaign to encourage Americans to open retirement accounts. Soon after that, nonworking married women began to complain that limiting their deduction to just $250 was unfair and discriminatory (near beneficiaries). And politicians were quick to propose accommodating the near beneficiaries and increasing the standard IRA deduction. A privatization coalition was born.

The “tax loss” (as the Treasury puts it) of IRAs has vastly exceeded the original Reagan Administration projections. Yet repealing on reducing the deduction is already politically unthinkable—the coalition is too powerful and the privatization ratchet is in place….In short, the incentive has begun to divert the pressure of demand for a secure retirement income away from the publicly provided system (Social Security) and to the private alternative (IRAs)….From the budget-cutter’s point of view, the growing power of this IRA coalition offers the only real hope for spending reductions in Social Security, since the more Americans prefer IRAs as their primary pension vehicle, the weaker will become support for retaining Social Security in its present form.

I’m going to keep digging here, but I’m very intrigued to see how the right took a Public Choice critique of what the government does and consciously create the same dynamics in the private markets in order to distance people from what the government is capable of doing.