Is the Georgia Works Program a Failure, How Could We Tell and Would We Even Care?

have the opportunity to train with a potential employer for a maximum of 24 hours per week for up to eight weeks. The Georgia Department of Labor (GDOL) provides a stipend and workers compensation coverage to participating job seekers. Employers pay nothing to these trainees. GW$ provides employers the opportunity to train and appraise candidates at no cost. There is no obligation to hire any given trainee…

Congressional conservatives such as Eric Cantor like the program, so there’s a good chance it might pass. I actually missed the debate about this from a few weeks ago — Zaid Jilani at Think Progress has a summary of some pros and cons from the time.

I’m fascinated by the terms under which people might justify this as a good program or would say it is a failed program. Its ideology works well for people who are concerned that our workforce lacks the training for 21st century jobs: it allows workers to brush up their skills at no wages so they’ll be prepared to take on a job at the end. But even a quick glance at the underlying data shows that, instead of a program to jump-start education and training for skilled jobs, it looks like the Georgia Department of Labor is running a low-skills temp agency out of its UI fund for the benefit of employers.

Do the Numbers Fail?

How would you use the data to justify taking this program to a large, national scale? There are three hypotheses I can imagine being in play, and all of them turn out to have major problems.

From its 2003 launch to the end of 2010, some 30,866 trainees entered the program, according to data provided to HuffPost by the Georgia Department of Labor. Of that total, 5,089 workers — 16.4 percent — were hired by the company that trained them during or at the end of the training period. (The department says that among workers who completed the full eight-week training, the employment rate is 24 percent.)…

Census Bureau data show that in 2007 and 2008, 15 percent of Georgians who’d been out of work for six months or longer found work within one month of a survey, according to Jesse Rothstein, an associate professor of economics and public policy at the University of California at Berkeley. In 2009 and 2010, the number fell to 10 percent.

So the transition from unemployment to employment looks to be very similar between those who do the program and those who don’t, with the big difference being that those who do the program spend upwards of 24 hours a week working for free. Around 70% of Georgia Works participants are women. In so much as the workers in this program will have low skills and thus low resources (more on this in a second), it is likely much of their “leisure” time is spent on child care, uncompensated work in the household, or economizing household purchasing power — there probably isn’t much superfluous time to just give away to employers.

Hypothesis two, the most important one, is that these jobs require unique skills and the potential workforce doesn’t have the right ones. Thus a special training period is necessary. What kind of jobs would these be? They would require more education than normal low-skill jobs. They would be jobs that are difficult to be productive in right away. They would involve new technologies, especially in manufacturing, that go beyond the normal workforce. They would cluster in the “some college” category at least.

Eileen Appelbaum of CEPR looked into the jobs data and concluded that for those who:

I was able to get the same data on successful job hires through the Georgia Works program for the period from November 2009 to October 2010. The total number of successful hires was 7,997, and they are divided up by NCCI code for categories. Here’s a chart showing some of the major jobs types that stood out. Sixty percent of Georgia Works hires belong to four broad job categories: 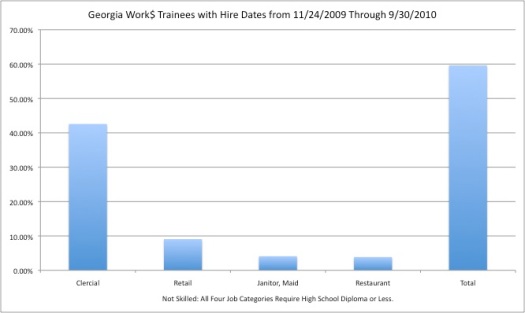 What does this tell us? All of these jobs, according to the Bureau of Labor Statistics’ (BLS) Occupational Outlook Handbook (OOH), require a high school diploma or less. They are all jobs that are “de-skilled”: the types of jobs someone can go into and out of and be relatively productive at day one. Many of them are high churn, high turnover jobs. Indeed, they seem more characteristic of a temp agency than an institution that is focused on jobs that require skills to accelerate productivity.

Next I took the top 30 classifications in the data and cross-indexed them based on my reading to education requirements and hourly wage as found in the OOH. The top thirty job classifications represent 80% of the hires of Georgia Works, so it is a representative sample. As you can see, I had trouble finding jobs in the top 40 occupations that required even an associate’s degree, much less a college degree. This is the percentage of jobs by education level: 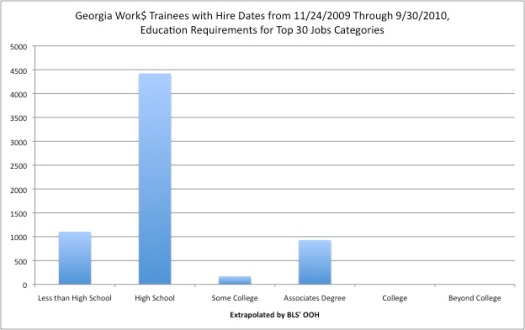 Among the top 30 jobs in Georgia Works, it is more likely that a given job will require less than a high school diploma, or no formal education, than it would require an associate’s degree. They are more likely to be jobs like janitors, restaurant servers, and maids than those that require new skills and specific training unique to the new century. Even the high school level includes a lot of jobs — clerical work, storage warehouses, drivers, retail — that allude more to temp agencies than high-tech.

A third hypothesis is that workers will make more money if they are hired through this program than through normal job searches. In this hypothesis, giving labor away is a sign of being a non-shirking worker and employers will largely compensate back the lost hours in the post-hire salary.

That’s a simple empirical question I don’t have the data for. But I did notice this slide in this October 2010 presentation on Georgia Works, A Perspective Toward Job Growth and Training Initiatives in a Recovering Economy: 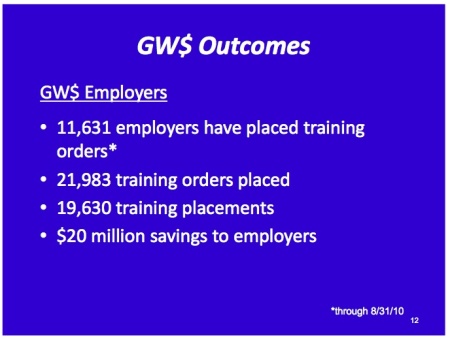 If, after examining the data closely, you can go around telling employers that they are saving over $20 million dollars — savings that must come from not paying salaries — it’s hard for me to think that it ultimately nets out back to workers.

A Failure in Ideology?

Here’s a cool thing about neoliberal policy: you can justify any kind of terrible proposal by invoking the idea of a market and throwing more weight on the back of that already overburdened word “choice.”

So I could say, “This certainly looks like a way to run a low-skill temp agency giving weeks of free labor to employers, employers who already probably have monopsony power and labor that is effectively deskilled, with taxpayers picking up the tab.” A neoliberal would then respond, “Well this program gives people the market dynamism of the choice to be choosing in the market of choice for the market of uncompensated labor, a choice market that synergizes with employer’s full choice of market wages,” and in our age that would somehow constitute a strong retort. Repeat that enough and the policy fellowships will just start falling into your lap.

But we have to step back and think: What kind of labor contract do we want the government creating, encouraging, and setting boundaries on? I’ve been discussing how our laws, courts, and institutions create the free-floating notion of a “free” labor contract. For all the talk about “choice,” this program nudges people into working for free in what are likely already difficult, exploitative markets. What are already high-churn industries will now have wages depressed even further from taxpayers subsidizing unpaid labor. And the ideas that derive from it — that the problem with our economy is that workers are lazy and stupid rather than that the fact that there are no  jobs, that employers should get more claims on work for free and that the spirit of indenture should be strengthened in the workplace — are the ideas that liberals have to fight against in these dark times.

6 Responses to Is the Georgia Works Program a Failure, How Could We Tell and Would We Even Care?