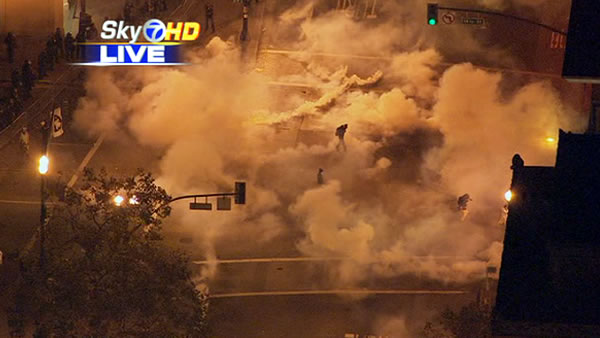 As someone who has lived briefly in both the neighborhoods of Lake Merritt and Temescal in Oakland, I simply don’t know what to say about what happened in Oakland yesterday.  Here’s aerial footage of canisters exploding in the streets.

I’m just going to suggest checking out Aaron Bady on all this, who starts by making the simple observation: “You might find it a bit confusing trying to keep track of the different times the Oakland Police department used tear gas on peaceful protesters yesterday.”  He goes on from there to provide his observations along with links to video, photos and other coverage.

Also I’m grabbing this from Aaron: “You can get a more complete rundown from Mother Jones, who had some great people there. Oakland North had great coverage. And TheLede has a good round up, as does Greg Mitchell.”

From Iran Channel, here’s how to defend yourself against tear gas, because that’s evidently a practical link for me to share with you.  From Slate, Why Isn’t Tear Gas Illegal?  Fun facts:

Yes, but only in war. The 1993 Chemical Weapons Convention doesn’t apply to domestic law enforcement. (The United States was a major proponent of the exemption, fearing that the convention might be interpreted to prohibit lethal injection.)…

The United States is so enthusiastic about riot-control agents that it has a standing Executive Order reserving the right to use them on the battlefield, in spite of the Chemical Weapons Convention’s prohibition, to protect convoys or prevent the use of civilian shields. While the U.S. hasn’t invoked the order since ratifying the Convention in 1997, Donald Rumsfeld made news in 2003 when he raised the possibility.

2 Responses to Violence at Occupy Oakland