Three random numbers related items I want to get on the blog before I forget.

I am sadly becoming old and less cool, because I totally missed the rollout of the JOLTS – Job Openings and Labor Turnover Survey – numbers this month. Job openings dropped to 2.3% from 2.4% while unemployment stayed the same.  This means even less evidence for those who think our problems is, like Napoleon Dynamite put it in a different context, that the unemployed don’t have any good skills: 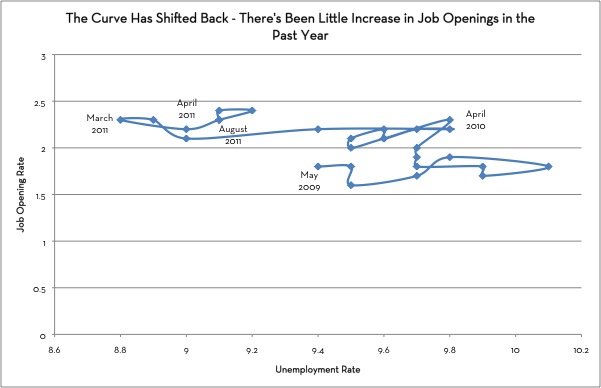 From the New York Fed’s Quarterly Report on Credit, there are almost as many student loans as there are car loans in the country: 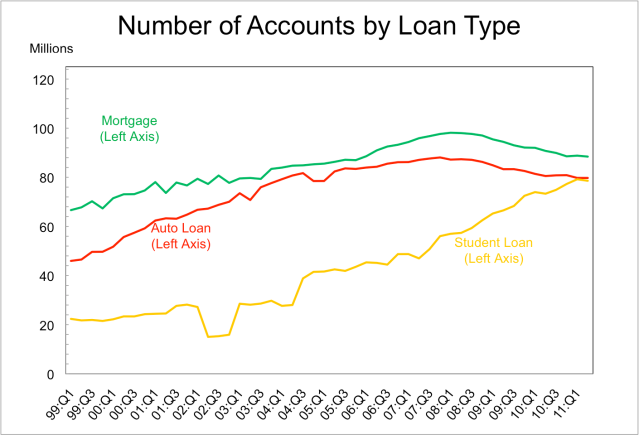 As Felix Salmon dug out, the New York Fed is actually missing a ton of student debt in this report, so it is certainly higher and we will report it when the New York Fed updates.  There’s something clever to be said about what kinds of debt are necessary to be mobile – physically and economically – in the way we’ve set up our society that I’ll hopefully get back to.

Ratio of Working-Class to Prisoners

Doug Henwood doesn’t like Angela Davis’ advice for Occupy Wall Street to identify with the defeated:  “There are about 70 times as many employed members of the working class as there are prisoners in the U.S….Why such an emphasis on people with no social power?”

Now I’m more of a “Your Honor, years ago I recognized my kinship with all living beings, and I made up my mind that I was not one bit better than the meanest on earth. I said then, and I say now, that while there is a lower class, I am in it, and while there is a criminal element I am of it, and while there is a soul in prison, I am not free” guy myself, but everyone has different opinions on Occupy Wall Street. But what about that “70 times” number?  Does that sound right? 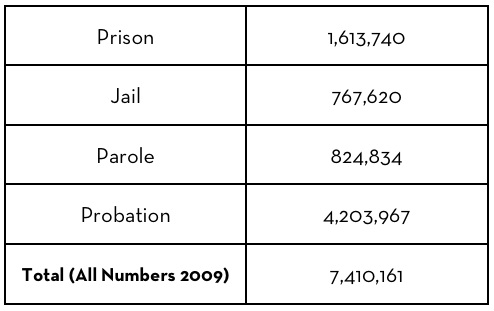 I’m going to count parole/probation as under state control.  Our system of parole/probation function to help create the conditions of permanent imprisonment: “The American Bar Association Criminal Justice Section recently embarked on a project to catalogue all state and federal statutes and regulations that impose legal consequences on the fact of a felony conviction. As of May 2011, the project had catalogued over 38,000 such provisions, and project advisors estimate that the final number could reach or exceed 50,000.”  25,000 state regulations working their magic on the bodies of the recently imprisoned I can ignore. 50,000 is harder. Talk about a need to deregulate!