What Can We Say About President Obama’s Economic Performance in Early 2010? 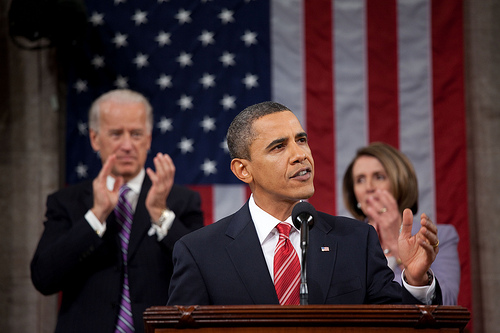 There’s an argument that we should look less to President Obama for the success or failure of the economy in this Great Recession – especially with the lack of movement on unemployment – and more to Congress and the Federal Reserve, especially as they interact with the Presidency. The role of President as agenda-setter is overrated and maybe even counter-productive, because it increases partisanship in Congress.  The role of President as rhetorician doesn’t hold up in political science literature and is exaggerated because of the way we (and the media) view elections and government generally.

This argument sets the tone in Ezra Klein’s big New York Review of Books piece on Suskind’s Confidence Men and Obama’s performance on the economy.  Discussing it today at his blog, Ezra notes:

My retrospective on the Obama administration’s economic policy, my review of Ron Suskind’s “Confidence Men,” and even my column yesterday on FDR are all efforts to make the same point: The president is not as powerful as we think. If you believe that the state of the economy drives the electorate’s evaluations of our political leaders — and you should believe that — then you have to grapple with the fact that the president is primarily responsible for economic conditions and needs either Congress or the Federal Reserve to join him in making economic policy…I think, from 2009 to 2010, the Obama administration operated on the frontier of the policy possible. They did about as much, and perhaps a bit more, than they could reasonably have been expected to do….Since the 2010 election, however, they have made one mistake after another….

The point of these pieces has been that we systematically overrate the power of the presidency and underrate the importance and autonomy of Congress and the Federal Reserve.

There’s a lot of truth there.  The President’s powers are going to be held in check by Congress – with a dysfunctional Senate – and the Federal Reserve – where liberals haven’t been agitating for more hawkishness on unemployment.  But with that said, it means that everything the President could do by himself is suddenly more important, especially when it comes to government spending.  And the President actually did counterproductive things, things that signaled they were happy with a slow recovery.

Starting in 2011, we are prepared to freeze government spending for three years.  (Applause.)  Spending related to our national security, Medicare, Medicaid, and Social Security will not be affected.  But all other discretionary government programs will.  Like any cash-strapped family, we will work within a budget to invest in what we need and sacrifice what we don’t.  And if I have to enforce this discipline by veto, I will.  (Applause.) …

Now, I know that some in my own party will argue that we can’t address the deficit or freeze government spending when so many are still hurting.  And I agree — which is why this freeze won’t take effect until next year — (laughter) — when the economy is stronger.  That’s how budgeting works.  (Laughter and applause.)  But understand –- understand if we don’t take meaningful steps to rein in our debt, it could damage our markets, increase the cost of borrowing, and jeopardize our recovery -– all of which would have an even worse effect on our job growth and family incomes.

A veto threat!  The economy would be strong enough in 2011 to start freezing government spending.  Now there’s been a lot of downward revisions, and they didn’t know how bad the economy would be now.  So to be careful about this, let’s go to the January 2010 Federal Reserve economic projections, which summarizes how leading economists would have thought about how the recovery looked going forward.  Here’s the unemployment rate for 2011 from the point of view of January 2010:

It’s clear from the speech:  President Obama announced the freeze and veto threat, and didn’t sound alarm bells, because he believed that the potential risks associated with not signaling to the bond market that deficit reduction was coming outweighed the reality of high unemployment and trying to expand the deficit immediately.  20+ million people not finding full-time work with certainty is bad, but just the possibility of the confidence fairy getting angry is far worse.

This stands in for policy more generally, and it leads directly to all the failures of Grand Bargains and two-deficits cartwheels when it came to plans for dealing with the unemployment crisis.  It splits the party between those who have to argue for bond vigilantes and those who have to argue against.  The deficit hawkery negates the most powerful market indicator we have for what the government should do – the interest rate.  This approach puts boundaries on the range of acceptable ideas on what can be done for the economy – and places getting stimulus out the door through discretionary spending, outside of Congress, out of bounds.  And meanwhile current interest rates have never been lower – they are negative in real terms for 10 years out.  This was exactly the wrong call to make in early 2010.

(Oh, and Mitt Romney is writing that “President Obama has put our nation on an unsustainable course. Spending is out of control.”  He’s very much not mentioning the time Obama dressed down the hippies – “That’s how budgeting works” – with a veto threat in order to curtail government spending with unemployment over 8% – nor will he.)

19 Responses to What Can We Say About President Obama’s Economic Performance in Early 2010?