Day of Action on Foreclosures: Baron Haussmann, Central Planning and Mortgage Servicing as a Critique of Hayek’s Theory of the Use of Knowledge in Society

Today is National Day of Action on Foreclosures. Occupy Our Homes has created a list events at their site. Here’s a great video on what is going on in Brooklyn, which shows the neighborhood devastation happening there:

Let’s step back for a second.  Between 1853 and 1869, Baron Haussmann tore down and rebuilt major parts of Paris according to principles of hygiene and circulation. He installed roads, sewers, and other public works and demolished neighborhoods, rebuilding them alongside modern technology. These neighborhoods became more stratified by class and function and more easily controlled by state forces.

A general critique of city planners like Haussman is that they’ve rebuilt their city in order to make it, in James Scott’s phrase, seeable by the state. This reconstruction of Paris was focused on simplification, legibility, and centralized, managerial control, regardless of the local knowledge and practices destroyed in the recreation. Critiques like this extend across modernity, especially to those Americans like Robert Moses who built highways through major metropolitan areas.

Though Scott was looking towards models of embeddedness developed by those like Karl Polyani, most people who develop these critiques invoke Hayek and the price system of the market as the superior way of planning. The profit-motive of the price system coordinates information across a vast network of agents who will never know each other. This allows for the most efficient use of society’s resources. By seeking out profit opportunities, individuals will coordinate the whole.

There have been millions of foreclosures over the past several years and there will be millions more in the next few years. They are reworking neighborhoods in much the same way Baron Haussmann once did — but this time the process is driven by the free market of financial capital rationally seeking profit rather than a central planner dreaming about how to make a city “modern.”  How are the results?

The central agents in this story are mortgage servicers. Servicers are entities that accept payments from borrowers.  They also handle when mortgages become distressed and are the entities responsible for modifying and handling distressed mortgages. They are distinct from the company that lent out the money. With the vast majority of mortgages now run through this relatively new servicing model, one created alongside the slicing-and-dicing model that took over consumer finance, this is the key type of entity responding to the profit motive in the mortgage payment market.

How do the mortgage servicers earn their profit?  At their core, they respond to three principal-agent problems in their “Pooling and Service Agreement” contracts.  As Adam Levitin and Tara Twomey argue convincingly:

[S]ervicers do not have a meaningful stake in the loan‘s performance; their compensation is not keyed to the return to investors. Second, the servicing industry‘s combination of two distinct business lines – transaction processing and default management — encourage servicers to underinvest in default management capabilities, leaving them with limited ability to mitigate losses. Servicers’ monetary indifference to the performance of a loan only exacerbates this situation….

Can we chart the logic of how servicers handle mortgages in trouble?  From the National Consumer Law Center’s “Why Servicers Foreclose When They Should Modify and Other Puzzles of Servicer Behavior,” (pdf) by Diane E. Thompson: 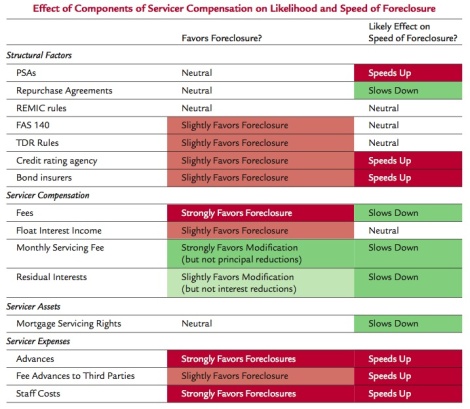 To expand for a second on their incentives, they include:

Maximizing fees.  As a result of the servicing “Pooling and Service Agreement” contracts, servicers have an incentive to push borrowers into default and keep them there.  The fees associated with them go straight to the servicer.  And if the loan goes into foreclosure, the servicer is paid first before the investor recoups any money.  So fee pyramiding and/or loading a loan up with fees to the point where it becomes difficult for the borrower to pay and then foreclosing without modification — a nightmare scenario for both the borrower and lending – is fantastic for the servicing firm.

Making bad modifications. If a debt goes bad, there should be a good-faith effort to successfully work it out and modify it before a foreclosure happens.  As Lou Ranieri, the pioneer of the mortgage-backed security puts it, “You are almost always better off restructuring a loan in a crisis with a borrower than going to a foreclosure… If we keep letting these things go into foreclosure it’s a feedback loop where it will ultimately crush the consumer economy.” Since servicers are paid as a percent of principal, they have an incentive to make modifications that increase principal and reduce interest rates, even if these loans aren’t sustainable. This goes double if they have exposure to junior-lien debts.

Quick turnaround without proper legal attention. Since the system is designed for servicing to be a thin business model, there is no infrastructure, nor means of investors to force one to be created, to handle a troubled housing market. Proper staffing is a sunk cost that isn’t easily recouped. It shouldn’t surprise us that informants are saying that:

20% of files with phantom referrals, approximately another 35% of files had some problems in them. Those problems varied, and included among others, an ARM that had improperly adjusted up, a failure to properly account for a borrower’s principal and interest payments, and a failure to properly attribute payments between pre-petition and post-petition that led the banks to try to collect pre-petition obligations they were not permitted to pursue.

These all add to fee income.

So this is the fruit of the private-market securitization market that is now running our mortgage markets. What I find fascinating is that the key things that are motivating servicers in their profit-maximizing don’t aggregate widely-dispersed information in the way Hayek described in The Use of Knowledge in Society.  They aren’t signaling out, or absorbing the signals of, relative prices of scarcity or substitution. They aren’t reacting to an increase in the price of tin without having to care why it has increased, nor are they increasing the price of tin by selling less of it, influencing people they’ll never meet.

As Thompson puts it, “How servicers get paid and for what is determined in large part by an interlocking set of tax, accounting, and contract rules.” At their core, they are reacting to laws we use to restructure debt in bankruptcy, the prioritization of multiple liens in distressed debt, REMIC tax law, standardized contracts with poor monitoring of agents, a lack of enforcement of foreclosure laws and, most importantly, the ability to skim off the top. If you look at the chart of incentives for servicers above, none of them are really relevant to either taking in or sending out information about the mortgage market.

We shouldn’t think of any of these things that force homeowners into bankruptcy as reflecting any marginal information about housing, homeowners’ ability and willingness to pay, or the availability of capital. They are a combination of laws we’ve chosen for ourselves about the managing of private property in housing and debt and a standardized contract among a handful of big financial firms that have ended up in a vicious battle over monitoring of the servicers themselves.  And that doesn’t even get to the externalized costs of a foreclosure to the community. The model is driven not by an abstract invisible hand but by the very real laws and contracts in which they are embedded. When those laws and contracts are faulty — as they are here — no useful information or allocation happens.

Which is all to say, if we had a central planning team of Baron Haussmann, Robert Moses, Le Corbusier, and Lenin running the United States mortgage market, I can’t imagine they’d do more damage to our neighborhoods and communities than Bank of America’s servicing arm is currently doing.

10 Responses to Day of Action on Foreclosures: Baron Haussmann, Central Planning and Mortgage Servicing as a Critique of Hayek’s Theory of the Use of Knowledge in Society