Franchise Value of Banks and The Effects of Deregulation.

Numbered lists! Paul Krugman posts six reforms ideas, which along with the four goals list of Ezra Klein are the two best numbered lists of things to consider in this financial reform debate I’ve seen lately.

Next, Mr Krugman had another interesting thought that I’ve been musing on for a couple of days. He said he’d been having the uncomfortable feeling that the crisis-free years of the postwar period had little to do with any particular financial regulation and a lot to do with the franchise value of banks. The banking sector, at that time, was highly uncompetitive. The lack of competition made bankers fat, happy, and risk averse. When the banking sector was deregulated, banks had to work for their money. This led to some improvements in customer experience, but it also made bankers more aggressive in their pursuit of new profits (particularly as public ownership of large financial companies became more common). This increased the involvement of big banks in dangerous financial activities, which led to growth in systemic risks.

And Yglesias has more, including a good Gary Gorton article.

Graphs! Which leads to a bigger question I’ve been thinking of lately: In what ways did 1980-2000 deregulations change the financial sector? This goes to the franchise value question. First off, it’s true that there are a lot of new players to the financial space post-1980: 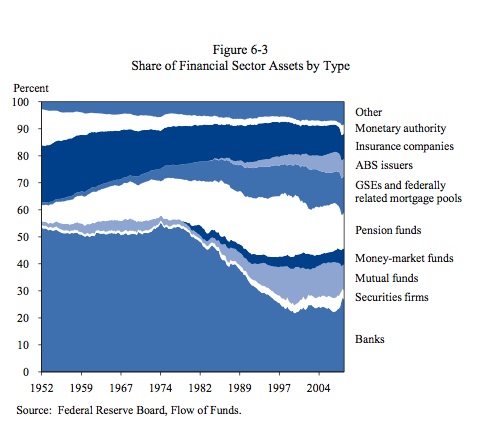 But let’s look at some graphs comparing finance to other deregulated sectors from the early 1980s. From Doug Henwood, here are wages in the trucking industry following early 1980s deregulation, when the franchise started to collapse: 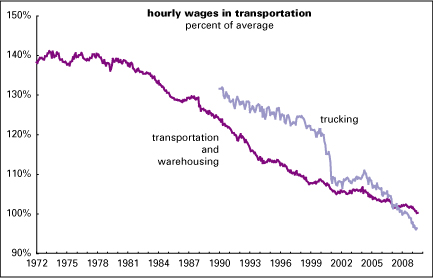 And from the Federal Reserve Bank of San Francisco, a study of airline deregulation. They concludes “while profits have fluctuated a great deal, the industry in the U.S. has been characterized by steady growth, falling prices, and moderate concentration, suggesting a positive impact of deregulation”, this graph:

I was actually going to write James Kwak last week and tell him to get his most important graphs from 13 Bankers online for the upcoming financial reform talks, but he’s gone and done that. From 13 Bankers, profits and compensation:

Notice that the protected profits and compensation of the pre-1980 era pale in comparison to the post-1980, and notably post-2000 era. (Everyone brings up how little the money in Liar’s Poker seems to people on Wall Street today and if you re-watch the Oliver Stone movie Wall Street today, the scandals and dollar sums also seem like chump change). So if the financial industry, broadly speaking, was offered a chance to go back to the protected pre-deregulated industry of 1976, I don’t see them jumping at the chance like perhaps trucking or airline industries might. The money makers here are high-yield debt, securitization, arbitrage trading, derivatives and (most importantly) the move of financial intermediation from banks into the capital markets. We could cartelize these activities, and arguably derivatives is already this way among the major market dealers.

Now we could create shadow banking licenses to re-create a cartel, but we currently have a much more concentrated banking sector than we’ve had pre-1980s in the boring period: 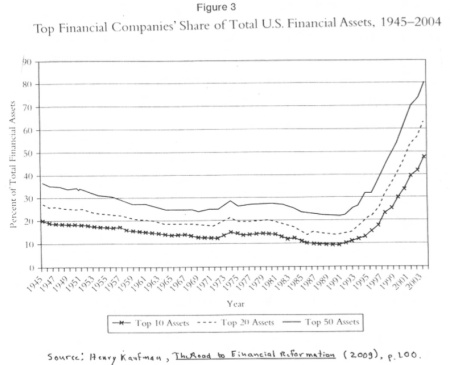 I’d also like to throw a link to this paper by James Crotty: “If Financial Market Competition is so Intense, Why are Financial Firm Profits so High?”, which finds the reasons “are: rapid growth in the demand for financial products and services in the past quarter century; rising concentration in most major financial industries that makes what Schumpeter called “corespective” competition and the exercise of market power possible (thus raising the possibility that competition is not universally as intense as Volcker assumed); increased risk-taking among all the major financial market actors that has raised average profit rates; and rapid financial innovation in over-the-counter derivatives that allows giant banks to create and trade complex products with high profit margins.”

I’m still thinking all this through, and these are some of the problems I’m trying to figure out.

15 Responses to Franchise Value of Banks and The Effects of Deregulation.