Foreclosure Fraud For Dummies, 4: How Could This Explode into a Systemic Crisis?

(This is a series giving a basic explanation of the current foreclosure fraud crisis: Here is Part One, Part Two, Part Three, this is Part Four and Part Five.)

Right now the foreclosure system has shut down as a result of banks’ own voluntary actions. There is currently a debate on whether or not the current foreclosure fraud crisis could explode into a systemic risk problem that perils the larger financial sector and economy, and if so what that would look like.

No matter what happens, the uncertainty about notes and what is currently going on with the foreclosure crisis is terrible for the economy. Getting to the heart of this problem so that negotiations can be worked out is important for getting the economy going again. There is little reason to trust what comes out of the servicers and the banks in whatever they conclude at the end of the month, and the market will know that. Only the government can credible clear the air here as to what the legal situation is with the notes and the securitizations.

But I wanted to get some unlikely but dangerous scenarios on the table in which this blows up. Bangs, not whimpers.  The kind where Congress is pressured to act over a weekend.  I had a discussion with Adam Levitin about how this could explode into a systemic problem.

First scenario involves title insurance. Specifically if title insurers decide to take a month off from writing title insurance even on performing and current loans to investigate what is going on with note transfers.

If that happened there would be no mortgage sales (except for those involving cash) in the country. The system would simply stop. Everyone with an interest, from realtors to Wall Street to construction to huge sections of the economy, would face a major crisis through this short-term pinch. There would be a call for Congress to step in immediately.

You can tell that the title insurance market, which is largely concentrated and also holding very little capital for a nationwide crisis scenario, is investigating the current problems.   They are holding off on certain types of foreclosed properties;  if they decide to hold off all together you could see a scenario where Congress is pushed to act immediately.

The second would be a wave of lawsuits. As we discussed in Part Two, many of the servicing agreements allowed for the trustees to force the depositors and sponsors to purchase mortgages without notes. That would be 100 cents on the dollar for mortgages worth pennies. If the trustees don’t take action, the investors could sue them. And the tranche warfare on this issue is intense, as foreclosures versus a few more payments radically change the balance between junior and senior tranche holders (See Tracy Alloway on tranche warfare here).

Here’s what this could look like. Read left side up for what the lawsuit screaming looks like and the right side down for the response: 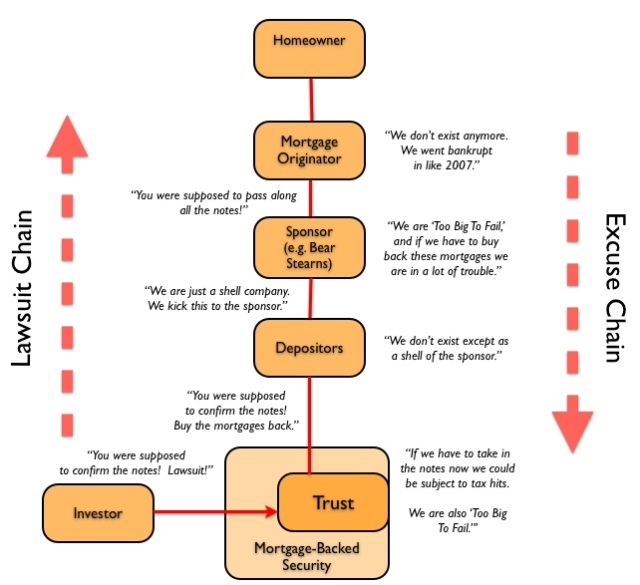 Much of the activity would center around the four largest participants in these areas, the Too Big To Fail institutions of Wells Fargo, Bank of America, Citi and JP Morgan.

And many of these mortgage-backed securities are cheap. So in an interesting scenario you could see hedge funds buying MBS for pennies just for the option to sue firms that are likely backstopped by the government.

If title insurance froze, or if the financial markets had a panic over fears of waves of lawsuits, there would be pressure for Congress to do something. Much of the law is New York trust law, so it isn’t clear Congress can act.   But there will be pressure.

Because if this bad-case scenario happens, which there is a small but reasonable chance it could, progressives need to have a clear sense of what they want in exchange for negotiations when the financial industry comes flying in over the cliff, a list of demands and questions to replace the in-large-part steamrolling of TARP over anyone’s interests but the banks.  Even if that doesn’t happen, but the slow bleed of the current dysfunctional mortgage market continues, progressive wonk policy initiatives that fix this crisis and get the mortgage market going again should be at the front of the debate.  We’ll cover this in Part 5.

19 Responses to Foreclosure Fraud For Dummies, 4: How Could This Explode into a Systemic Crisis?