How The Bailouts Hurt Small Banks and Benefited Big Finance.

I hope when Federal Reserve Bank of Kansas City President Thomas Hoenig is explaining to Republicans why they should be worried unemployment might come down too quickly, he takes a (very long) break from that argument to discuss this New York Times editorial, Too Big to Succeed. I still largely agree with the opinions he writes there, that the financial system is too concentrated and too top-heavy, leaving Too Big To Fail on the table, and this has been exacerbated by the bailouts.

Matt Yglesias and others have pointed out that Hoenig “is an employee of a coalition of a medium-sized banks who don’t want competition.” That’s a fair point, but it is important to remember how much the bailouts were primarily a mechanism that benefitted the largest institutions at the expense of smaller ones. Community and medium-sized banks have a right to be pissed as a result of the recent bailouts.  They also should fear that future bailouts, when they come if Dodd-Frank and resolution authority doesn’t work, will wipe them out entirely.

Raj Date, formerly of Cambridge Winter, listed three high-level arguments why this happened in his paper, Goliath 1, David 0 (my bold):

Notably, though, practically every bailout tactic implemented or proposed to date disproportionately benefits large banks and quasibanks, at the expense of smaller institutions…

First, for all their arguable benefits, the liquidity-enhancing rescue programs devised by the Treasury, Fed, and FDIC systematically have undercut the one great strategic advantage of small banks: persistent access to low-cost funding. Despite all the scale, technology, and brand advantages of big banks, historical FDIC data demonstrate, again and again, that smaller firms have been systematically able to build better deposit franchises (that is, more deposit growth, with better duration, for lower prices) than big banks…

But by effectively providing a liquidity backstop for all market participants — through programs like the otherwise wildly popular TLGP (in which the taxpayer, via the FDIC, effectively guarantees unsecured debt issuance by banks) — government policy has suddenly diminished the strategic and financial value of community banks’ core deposit franchises. For a modest fee, big banks that had run risky liquidity profiles (e.g. Citigroup, Bank of America/Countrywide/Merrill Lynch) are suddenly able to issue unsecured debt with the full backing of the FDIC — as are finance companies (like GE Capital, or American Express), or even broker dealers (Goldman Sachs, or Morgan Stanley), which all have been hurriedly waved under the protective aegis of the banking system by the Fed.

Policy-makers, in effect, have decided to give to big firms, for very close to free, a strategic advantage that small banks have literally spent years and much effort cultivating.

Second, the Treasury, Fed, and FDIC are artificially propping up the kind of non-bank capital market vehicles that pushed community banks to the periphery of lending in the first place….But the combination of government actions to date has, if anything, perpetuated this marginalization of community bank lending…

Big credit card banks — amazingly — continue to enjoy capital relief from securitization, and the securitization markets themselves have been propped up by the taxpayer through TALF. And, as mentioned above, when non-bank finance companies inevitably ran into catastrophic liquidity troubles they were backstopped by new government funding programs (like TLGP, or the Fed’s asset-backed commercial paper program) and quickly allowed to re-charter as banks and handed taxpayer capital under TARP….

Government rescue efforts, then, are unwittingly reinforcing the walls that prevent the market’s most efficient liability gatherers — small banks — from participating in the largest spread-generating asset businesses, from conforming mortgages to credit cards.

Third, the government’s efforts to cleanse bank balance sheets — the centerpiece of which is the Public-Private Investment Program — is almost certain to help big banks and especially Wall Street broker dealers (e.g. Goldman Sachs, Morgan Stanley), but will do virtually nothing for community banks. The reason is simple. Under the PPIP, the taxpayer (through the FDIC and the Fed) will extend a subsidy to hedge fund investors, thereby artificially increasing the price at which those investors are willing to buy “legacy” (formerly known as “toxic”) assets…Few sales of legacy loans will occur, therefore, and community banks will remain freighted with toxic (sorry, “legacy”) commercial real estate loans.

This is the same reason, by the way, that FASB’s much-trumpeted relaxation of mark-to-market accounting rules will benefit big banks and broker dealers more than smaller firms. Broker dealers have disproportionately huge securities portfolios; community banks do not.

So the overall pattern is clear: a series of large, expensive government rescue efforts will disproportionately help big banks, big broker dealers, and big finance companies — but not community banks. And given that markets are still competitive, providing taxpayer assistance to bigger firms will allow those large firms to, on the margin, out-compete their smaller brethren.

This was written in April 2009, when PPIP was still the centerpiece of the Obama administration’s policy to deal with the solvency crisis among the major banks, an approach that was eventually replaced with a series of stress tests.  Also, from Raj Date’s paper on the financial bailouts and resolution authority, here is how the bailouts look aggregated: 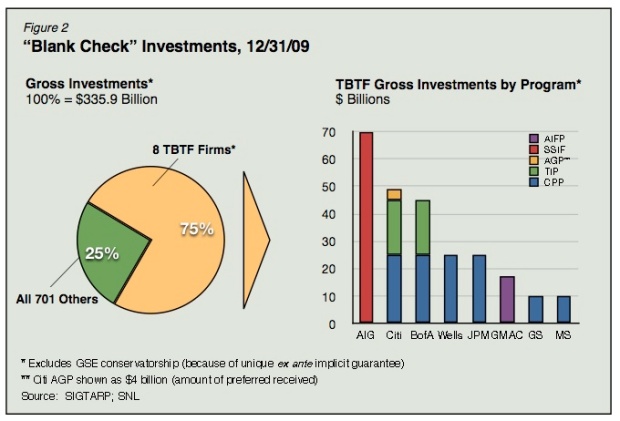 Of the bailout money and the debt guarantee programs (not to mention what we are discovering about the emergency lending facilities), 75% of each went to the largest firms.

So another shadow-banking panic inspired series of bailouts would take a major bite out of the business model of smaller banks.  And whatever you think of Dodd-Frank, the idea that the Federal Reserve now has a suitable regulatory fencing around the shadow-banking sector is uncertain at best.  And if you are worried about local knowledge and the financial sector, you should definitely be worried about this.

6 Responses to How The Bailouts Hurt Small Banks and Benefited Big Finance.